The aim of this website is to document and preserve the most retarded Youtube comments, so that people a hundred years from now can look back and take solace in the fact that the authors of these stupid comments have all since died. Some in horrible car crashes. Some from falling off ladders. Some from choking on peanuts. And some from falling off ladders while choking on peanuts. Thank God for Evolution.

Email the site at: syc09.blog@gmail.com

Killer whale attacks woman at SeaWorld. Did he died? We don't know!

More troubling is the fact that others actually upvoted this retard.

Facebook - Republican finds it difficult to express his feelings about Obama 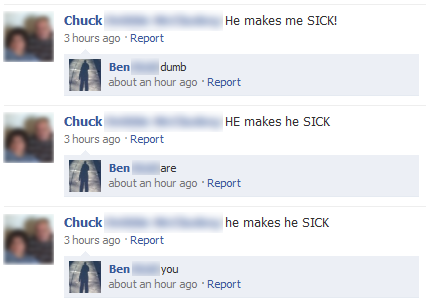 Third time lucky I guess! Found this on an anti-Obama Facebook group. PS: Thank you Ben. 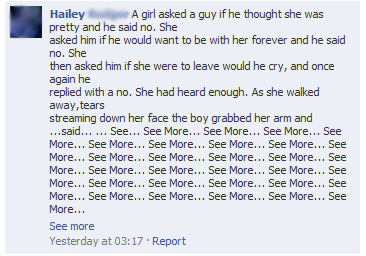 You can see why I had to post it.

Email ThisBlogThis!Share to TwitterShare to FacebookShare to Pinterest
17 comments

After making my last post, I decided to turn to that fountain of knowledge - you know... the comments section over on Youtube. It didn't surprise me to find that a few wackos were dirtying the place up with their pseudo-science and conspiracy theories.

I sincerely hope that this guy was being sarcastic.

Knowledge is something you don't have, said Allah. I decided to leave in argetfalcon's reply because it really does show KnowledgeSaidAllah up as the ignorant asshole he is. 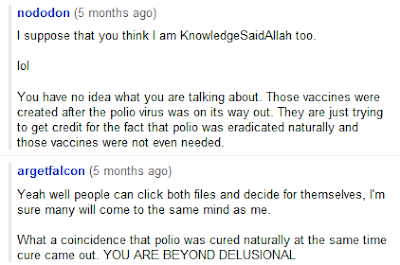 Once again, I left in argetfalcon's reply (somebody should buy that guy a beer). These people are not just delusional - they're as thick as shit.

Water can cure cancer, arthiritis and even your virginity

Came across this Youtube video of the US version of the show Dragons Den. This guy (Bruce McBernie) reckons that water can cure cancer, arthritis, hepatitis, the flu and a whole bunch of other stuff. I wasn't going to post this video, but I really wanted to say how much I hate all of this new-age hippy bullshit. I don't mind people believing in it and I don't mind people trying it. I just can't stand it when people say that such and such a product cures such and such a condition without producing any scientific evidence whatsoever to back their claim up. Not only is it ignorant and backward, but it's also dangerous. There has been cases where proven cures and treatments etc have been ignored because somebody felt that an unproven new-age therapy was the best route to take. I've heard of proven HIV treatment methods being disbanded in places such as South Africa because some quack doctor (who stood to make a buck) said that vitamins can cure HIV. Sure, you'll get survivors saying stuff like "Water cured my cancer". But that doesn't mean they're correct. There have been many cases of cancer cells suddenly going into remission. Just because you hopped on one leg and sang a song backwards, it doesn't mean that's what cured you. Anyway, the video:

Email ThisBlogThis!Share to TwitterShare to FacebookShare to Pinterest
3 comments 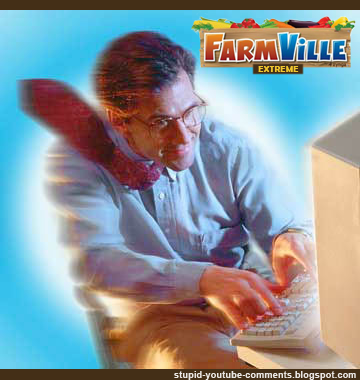 Hell motherfucking yeah! This bad boy will make your clicking finger work so hard you'll contemplate blowing your own hands off with a homemade pipe bomb just to spare yourself the pain. Now with twice the clicks, Farmville EXTREME will seperate the casual farmers from the real agricultural gaming experts. Challenge yourself as you try to avoid farming accidents, foreclosures, foot and mouth disease and even that filthy swine that calls himself a taxman!
Farmville Extreme may not be played by those with medical conditions or women with children in their wombs.

Email ThisBlogThis!Share to TwitterShare to FacebookShare to Pinterest
0 comments

Stumbled across a Take That (British boyband) video. And just as expected - it was littered with morons.

Truthificationul also thinks that words such as "is" are 'wack'.

I'm not going to top that one.

Email ThisBlogThis!Share to TwitterShare to FacebookShare to Pinterest
3 comments Labels: Take That

I don't care if I die tomorrow, I'm not forwarding on your stupid chain mail.

I was busy leaving hateful comments on a Jonas Brothers video the other day when I came across this:

I think it's pretty safe to assume that the people who read this kind of stuff and then proceed to pass it on are the same kind of people who read daily horoscopes and participate in cult suicides (not a bad thing). In my opinion, the IQ test should be completely scrapped. Instead, we should just count up all the times a person has forwarded on a piece of barely-intelligible chain mail and then declare them clinically retarded if that number is anything above -1. 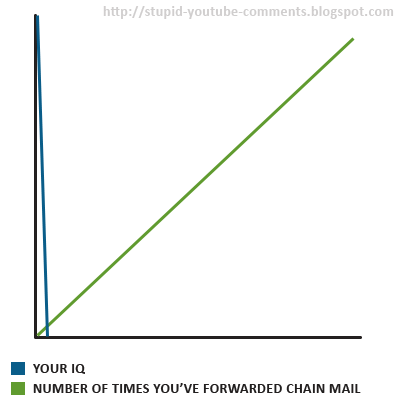 It's pretty obvious that somebody modified the original piece of chain mail so that it applied specifically to Youtube. It's also pretty obvious that the person who modified it knew that your regular Youtube user would not accept or follow the instructions of a comment that had no spelling mistakes in it. I really do hate people.